When the Sands Expo and Convention Center needed to install 2 large LED screens they called on the Imagineers at In-House Production to install these screens.

The Curved Screen in the Downstairs Lobby measures 93 inches wide by 68 inches high, and is hung 7 feet above the floor. The mounting solution IHP Imagineers came up with was to Anchor the screen to the Concrete above the drop ceiling and attached to the wall to keep from swaying.

The Flat Screen is mounted with a custom bracket made by IHP  Especially for this screen to hang on the wall. Considering the space this screen is in, it may look small, but the screen measures 133 inches wide by 75 inches high.

The Locations chosen were perfect for the IHP Imagineers to meet the Sands requirements. Another Solution to a problem found. Can we find a solution for You? 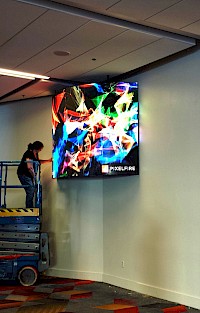 Mounted to left of Esculaters 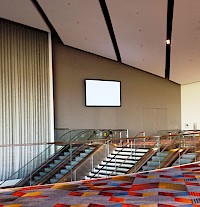 View from across Upper Lobby. 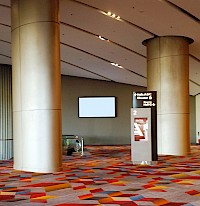